What is a robotic assisted hip replacement?

It is an operation where the surgeon uses a robot during a hip replacement operation. This is the same as a normal hip replacement but a robot is used to try and get the components in an accurate position every time. We think that getting the hip replacement right is important for better outcomes for patients.

How long has robotics been used for hip replacement

How is the operation planned?

Prior to the operation the patient will have a CT scan of the hip. From this any difference in leg length between the 2 sides is measured and if necessary a correction can be made in the surgical plan. The size and position of the components is then planned to the patients’ own anatomy to try and get the best match for each patient. 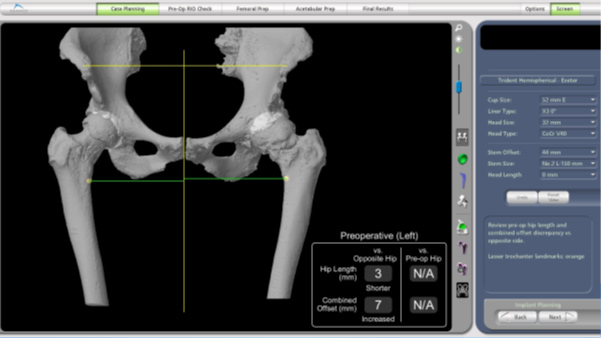 Planning the acetabular component position on the CT scan

How is the operation performed?

For the most part this is exactly the same as a standard hip replacement except for a few small differences. Metal pins are inserted into the iliac crest (pelvic bone) with an array attached which allows the robot to see where the pelvis is positioned at any time. Early in the surgery a series of anatomic landmarks around the hip are registered with the robot that allows it to recognize the anatomy and match it to the CT scan.

When preparing the bone for the acetabulum (socket) and inserting the prosthesis; instead of doing this freehand, the robot holds the instruments in the position that was planned. to ensure the plan is followed. When preparing the femur, the feedback from the robot informs the surgeon if what they are doing conforms to the original plan. 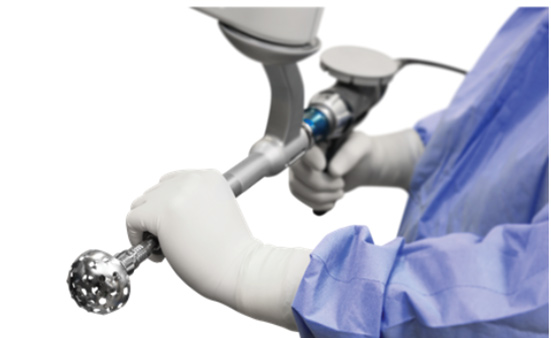 What prosthesis is used

What is the revision (redo) rate?

There is no data specifically looking at the redo rate for robotic hip replacement in Australia.

Is this a “less invasive” procedure

No. The same approach (cut) is used as a standard procedure. The robot can be used for any approach (Posterior, anterior or lateral)

Is it more accurate?

There are some early research papers that show increased accuracy of component positioning with robotics compared to manual techniques. We hope this will lead to a lower dislocation rate and better patient outcomes.